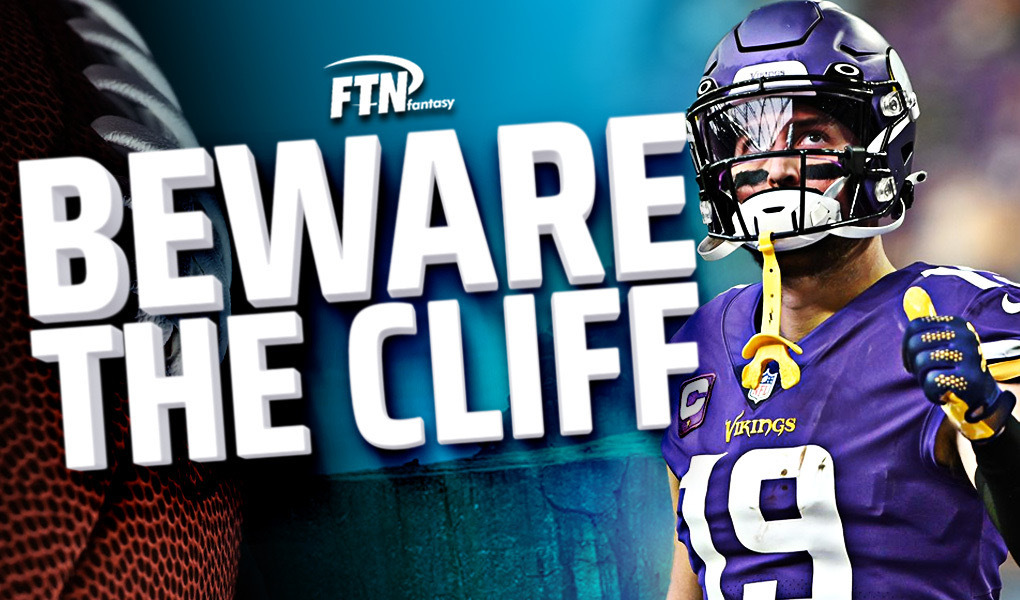 FTN's Jeremy Popielarz names several players whose production will drop off "The Cliff" in fantasy football.

With the dynasty offseason in full swing, many managers are making trades to remold their rosters. Upon doing this, they have to decide who are the players to move on from and the ones to acquire. The best managers have the ability to predict the production drop known as “The Cliff”, before it happens.

Making a deal before ensures optimal value for said player. The question is, how do we decide who and when? Today, we are highlighting a few players who will hit this “Cliff” in 2022. These are the players to move on from this offseason.

After eight seasons in the NFL, Adam Thielen has proven that his abilities are top notch, producing over 5,000 yards, 49 touchdowns and 464 receptions. However, over the past three years, he has been unable to play in every game due to injuries. Last season, he appeared in 13-of-17 games for the Vikings, producing 726 yards and 10 touchdowns. With the emergence of Justin Jefferson, Thielen has become the second option in the passing game. Turning 32 right before the season kicks off in September is worrisome. In both seasons over the age of 30, he’s failed to break 1,000 receiving yards. The only saving grace has been his touchdown production. He has scored 168 fantasy points over the past two years from touchdowns. This equates to 37% of his 452 total PPR points. This touchdown dependency is unsustainable, and a return to normalcy will have managers clamoring for more. “The Cliff” is here for Adam Thielen, don’t get caught at the bottom.

“Playoff Lenny,” as many refer to him now, really solidified his role in the Buccaneers offense in 2020, helping lead the team to a Super Bowl win. In his third season with the Bucs, the question is, how long can he go? As a physical runner who always wants to run you over, his body has taken a beating over the last five years. He is also entering his age-27 season. This is a historic age cliff for the running back position. The Buccaneers drafted Rachaad White out of Arizona State this year, a skilled receiver and runner, and this is not great news for Leonard Fournette. Last season, he saw 264 opportunities, with 84 of them being targets. With the addition of White, we can expect those targets to decrease dramatically. If White manages to impress the coaches as a runner, we could also see Lenny’s 180 rushing attempts decrease. Ultimately, he’s more likely to produce a season closer to 2020, when he finished as RB35, than his RB5 season in 2021.

It took eight seasons, but Cordarrelle Patterson finally emerged as a solid fantasy option last season, easily running away with the top waiver-wire add. He produced career highs in every category, good and bad. Due to this, the 31-year-old earned a new deal from the Falcons, a team desperate for playmakers. However, the Falcons also drafted Drake London and Tyler Allgeier this year, two players who can take away from Patterson's workload. Also, just the other day, the Falcons traded for Bryan Edwards, a former third-round pick. On top of this, they signed Damien Williams and Auden Tate in free agency. All of this added talent could result in Patterson losing most, if not all, of his opportunities. There probably isn’t a huge trade market for Patterson, but if you manage to find the one believer in your league, now is the time to move him.

As one of the steadiest fantasy producers in the NFL, Robert Woods has been a staple of fantasy rosters. He has produced over 3,000 yards and 14 touchdowns from 2018-20. However, coming off an ACL injury is not ideal for a player at the age of 30 years old. On top of that, he will also be adjusting to a new team and offense. That move is from one of the most innovative coaching staffs to a team that is more traditional in their scheme. This could have a huge effect on his steady production. As one of the best run blocking wide receivers in the game, he may be called upon to do a lot more of that in this run-heavy scheme.