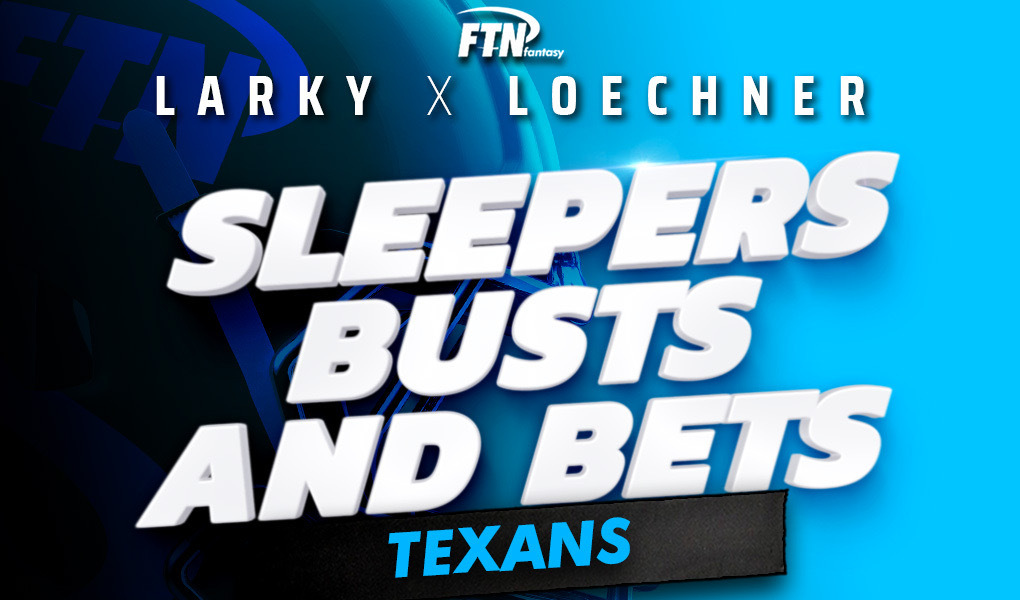 FTN's Josh Larky and Tyler Loechner offer up their picks for key names and situations to know for fantasy football on the Texans in 2022.

Tyler Loechner and Josh Larky continue with the 2022 Sleepers, Busts, and Bets series to preview all 32 NFL teams for the upcoming year. Next up: The Houston Texans.

(Follow along with the whole Sleepers, Busts and Bets series here.)

When throwing darts at late-round TEs, we want them to be athletic, as well as having a path to high target volume. Brevin Jordan ran a 4.68 40-time at his Pro Day, which is well above average, so he has decent straight-line speed. After Brandin Cooks, the entire receiving depth chart is filled with unknowns, so Jordan *could* rise as high as #2 in the pecking order for Davis Mills’ attention.

As a rookie, Jordan was only a part-time player in roughly half the team’s games, buried behind Jordan Akins and Pharaoh Brown on the depth chart. Akins is no longer in Houston, and when Jordan and Brown overlapped from Week 11 onward, Jordan out-targeted him 22-16 - despite Jordan playing far fewer snaps. Put another way, when Jordan did see the field, he was targeted at a rate similar to Cole Kmet in 2021.

Jordan’s targets per route run were also higher than rookie Nico Collins, the presumptive WR2 in this offense. Second-round pick John Metchie is currently rehabbing an ACL tear and does not project for heavy volume in year one.

Jordan should not be drafted outside of deep best ball formats, but monitor his early season usage. If he’s running 25 or more routes per game over the first couple weeks, scoop him off the waiver wire.

Davis Mills was dreadful to start his career in early 2021, then he had a hot-and-cold “run” for a month (Weeks 5-8), which was good enough to net him the overall fantasy QB16 in that span. He had two good games and two bad games, which made him streamer-worthy but not an every-week starter.

Mills then had a more impressive run from Weeks 14-18, and he finished as the overall QB10 in that span.

All told, from Week 5 onward, Mills was a fantasy QB1 in 40% of games and a fantasy QB2 in 20% of contests, making him a top-24 option at the position in 60 of the games he played. His current ADP is QB28, which basically means “never drafted.” But if he hits that 40% QB1 mark throughout the 2022 season, he’s going to be a popular streaming candidate the entire year when the matchup is right.

John Metchie is a popular late-round dart throw because he was fairly productive at Alabama, declared early for the NFL draft, and then was taken round two by the Texans. The list of positives for Metchie ends abruptly, though. He’s small, offers little after the catch, tore his ACL a few months ago and brought in a concerningly small percentage of Alabama’s touchdown receptions.

Wide receivers generally need some type of standout trait to be a difference-maker in fantasy football, and Metchie lacks that. I cannot envision any plausible scenarios leading to Metchie becoming a popular waiver-wire add in-season.

It feels a little unfair to call anyone in Houston a fantasy bust candidate for 2022 because all of them have extremely low ADPs that you really don’t have to give up much (if anything at all) to grab.

With that said, I’ll target Dameon Pierce as the team’s most likely “bust” candidate given that he is currently coming off draft boards as RB39, right in the range of top-tier backups like Alexander Mattison.

If you’re drafting Pierce in this range, you’re hoping that he takes over as the primary RB in Houston. But it’s an extremely crowded backield (more on that below), and he never handled a full workload in college. Throw in the Day 3 draft capital and the abysmal scoring potential of this offense as a whole, and you have a fantasy bust waiting to happen.

Brandin Cooks did nothing other than command targets in 2021. His target share was top 10 among WRs, and because Houston was often trailing in games, he had many opportunities to rack up usage in garbage time. Cooks’ seven games with 10 or more targets was more than all but seven 2021 receivers: Cooper Kupp (14), Diontae Johnson (11), Justin Jefferson and Tyreek Hill (10), DJ Moore and Keenan Allen (9) and Davante Adams (8).

The Texans project to have a below-average team again, so I fully expect garbage-time Cooks to continue in 2022 after the team extended him. The chemistry between Davis Mills and Cooks is apparent, too. In nine overlapping full games, Cooks averaged nine targets per game and a 28.1% target share - Diontae Johnson was at a 28.5% full-season target share for context. Cooks was the WR19 per game last year despite seeing a mix of rookie Mills and the low-volume Tyrod Taylor. A full-season of competent play and moderate volume from Mills, and Brandin Cooks has a strong case for top-12 status.

As Larky noted, Cooks is really the only good fantasy option in Houston (he’s also way too cheap currently). But instead of highlighting a potential high point for this offense, I’ll take the opposite approach and bet that none — zero! — of Houston's RB’s are relevant on a weekly basis in fantasy this year.

The backfield as of now: Marlon Mack, Rex Burkhead, Dameon Pierce, Dare Ogunbowale and Royce Freeman. That’s a lot of names that are hardly distinguishable from one another.

You also have the Texans coaching staff already talking up a potential committee. Per SI, Lovie Smith said, “You can’t ever have too many good running backs. I think as you look at our running back position, they all bring something a little bit different, little bit unique to the position."

In the end, a few of them might have a random good game here or there, but the bet is that none of them finish in the top 50 for fantasy purposes, and none of them end up being rosterable in traditional 12-team fantasy leagues.