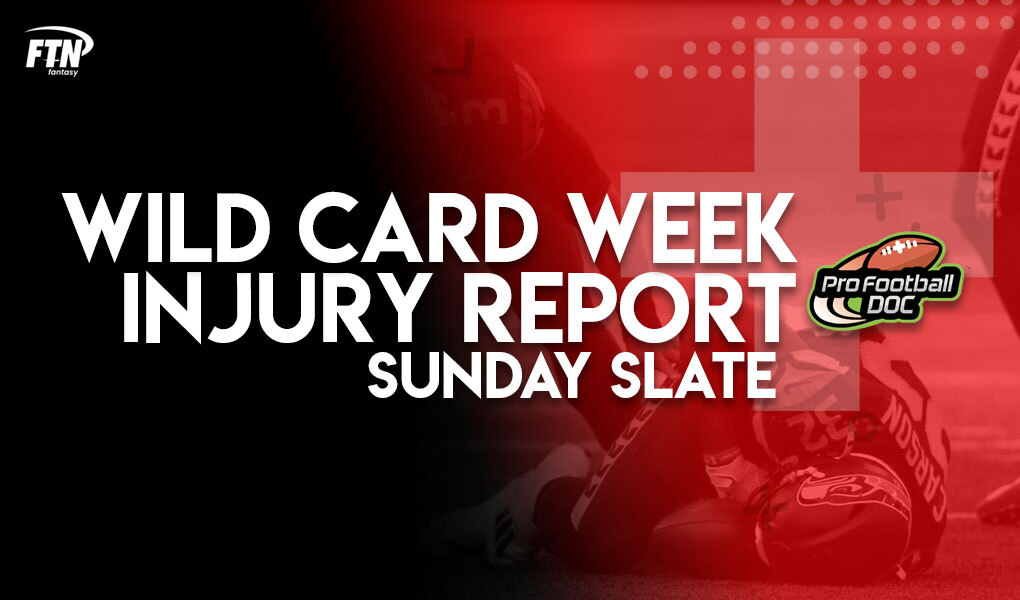 David Chao breaks down the health concerns and statuses of the playoff teams playing Sunday of Wild Card weekend.

The first Wild Card Sunday playoff game features a matchup of two of the healthier teams. Baltimore and Tennessee both lost their stud left tackles earlier this season but have adjusted nicely. They both are missing a slot wideout, though Willie Snead could return with his ankle.

The Ravens are getting healthy at the right time, as key defenders Calais Campbell and Marcus Peters both have recently recovered from calf issues. The Titans have gotten past the loss of linebackers Jadeveon Clowney and Jayon Brown.

The Ravens have a slight health advantage and both defenses have a small advantage over the offenses with the high total at 54.5 and strong run games.

ProFootballDoc is the official FanDuel Injury Expert; go to www.profootballdoc.com for free in depth playoff analysis and use the interactive Field View to see matchup details. 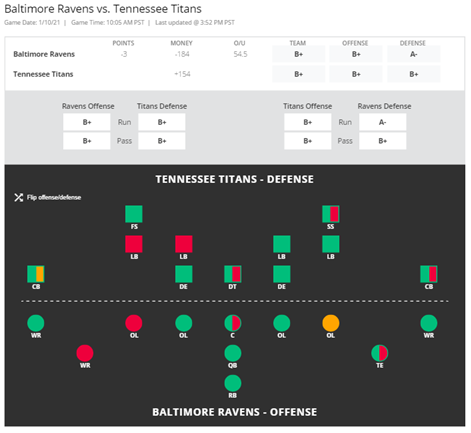 The Saints are getting healthy at the right time, while the Bears are among the more injured playoff participants.

Offensively, New Orleans returns what should be a healthy and productive Michael Thomas from his three weeks of IR rest for the lingering high ankle sprain, while the Sunday game allows Alvin Kamara time to come off the Reserve/COVID-19 list to play. Drew Brees’ chest/rib issues are behind him as well. Defensively it will be key to having Sheldon Rankins and Marcus Williams back with the main injury being Kwon Alexander who is done for the season with an Achilles rupture.

The Bears will miss two starting offensive linemen but have a chance to get Darnell Mooney back, though he has yet to practice. Allen Robinson has been given some extra rest with his hamstring but expect him to play and be effective. Defensively, Roquan Smith is almost certainly out after an elbow dislocation last week while corner Jaylon Johnson is trying to return with a shoulder issue.

The overall health advantage goes to the Saints here and there could be some points put on the board.

Despite media worries, our FanDuel Injury Expert has the Saints are clearly the healthier side in this contest. Go to www.profootballdoc.com for all the details on this and the other playoff matchups. 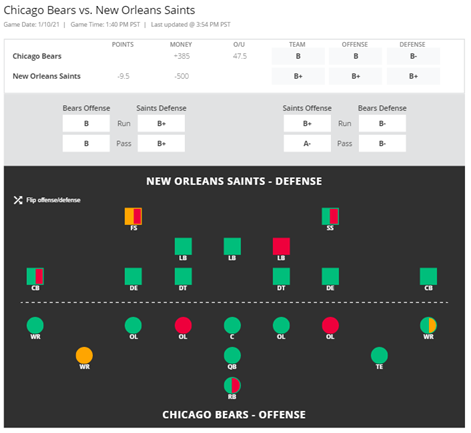 Conspiracy theorists would say whoever is playing Pittsburgh is the team that will have COVID-19 troubles. The Ravens and Titans both had multiple positive tests before playing the Steelers, and now the Browns just had seven players/staff ruled out of the playoff game including their head coach. The game will go as scheduled unless there is demonstrated active spread in Cleveland. In the end, there is little wiggle room for rescheduling come the playoffs.

The Browns already started as the less healthy team, with pass defense issues — corners are out and main pass rusher Olivier Vernon just tore his Achilles Sunday. Now they lose Ronnie Harrison, Joe Bitonio and Khadarel Hodge. The Browns will have Jarvis Landry. but they could miss their next three wide receivers with Hodge out, Odell Beckham already out and Donovan Peoples-Jones in question and yet to practice. The other issue is the Browns will likely not practice for most of this week due to COVID-19 precautions.

The Browns left it all out on the field to win to get in why the Steelers rested key starters and showed little of their playbook. Pittsburgh still has chronic linebacker issues but comes in with all the advantages and the home game here and the current line is -4.5.

See more from the FanDuel Injury Expert at www.profootballdoc.com where you can find interactive Field Views for match up specific advantages for DFS and wagers. 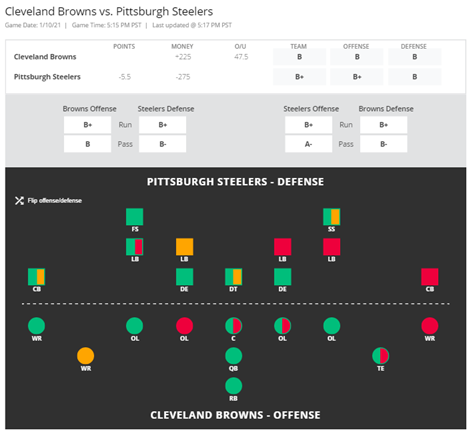