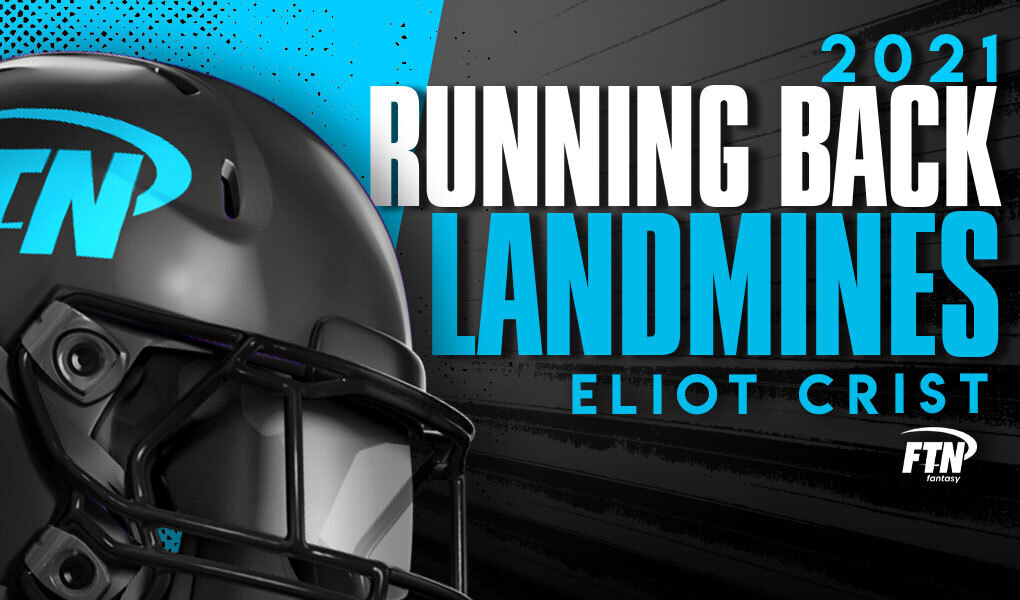 FTN's Eliot Crist identifies three running backs who are too risky in fantasy football to take where they are currently going in drafts.

The bell cow back is one of fantasy football’s great cheat codes, so much so that fantasy players year after year chase backs, pushing timeshare backs up the board in hopes they can catch lightning in a bottle.

The running back position is an oft-injured position that has teams splitting times between as many as three backs. Snaps and weighted opportunity are the most important things to look at for a running back when trying to predict success. It is obvious a player can’t score points if he isn't off the field — but we still have to re-emphasize that point. Playing time is often indicative of how a team feels about a player — if he is on the field, they believe in him — if he doesn't come off the field, regardless of how you may feel about the talent, the team is very high on him.

Often, you will hear people talk about how many touches a back has or how many carries they have — implying there is a floor and ceiling for a player. That is the equivalent of lighting a candle for light after electricity was invented — sure it helps, but there is better out there. That is where weighted opportunity comes in. Not all touches are created equal. In fact, a target is worth 2.83 times more than a carry in PPR leagues. Even in standard leagues, a target is worth 1.43 times as much as a target. The pass game usage is what separates a running back from a bell cow back and is required to maximize a ceiling.

Here are three running back landmines for 2021 who are being overdrafted.

RBs to avoid in your drafts - Fantasy football 2021

Here is a look at three running backs I am avoiding at their current ADPs in 2021.

Nick Chubb is not worth a first-round pick

I hate that I am writing up Nick Chubb, as he is one of the best pure runners in football. In fact, Chubb led all running backs averaging 4.06 yards after contact per attempt and forced the third-most missed tackles in all of football last year despite only playing 12 regular-season games. Chubb also runs behind maybe the best line in all of football. Last year, with Wyatt Teller on the field, the Browns best offensive lineman, Chubb averaged 94.3 yards per game on the ground, compared to just 39 yards per game without him, per the FTN Fantasy splits tool. Chubb’s rushing ability and efficiency is what has people chasing him up boards with an ADP as high as 7.3 on Yahoo.

The biggest deterrent for Chubb is that he is extremely limited in the passing game and Kareem Hunt isn’t going anywhere. In the last two seasons, Hunt has played 22 games where had 15 or more snaps, in those games, Chubb has only averaged 2 targets per game — in 0.5 PPR, Chubb averaged 14.94 PPR points and 37 snaps per game with Hunt, compared to 17.36 and 49 in other games. In a timeshare and not getting the passing-game work, you have a touchdown-dependent back who will have spike weeks, but will struggle to pay off his price tag. He should be going at the back half of the second round not in the first. He is overpriced and is a 2021 avoid at cost.

There is going to be a theme with the running backs on this list. Backs who split time and don’t catch many passes. The Ravens’ run offense is terrifying for opponents and J.K. Dobbins is a huge reason why. Dobbins is an extremely efficient back, leading all running backs (min. 100 carries) in yards per attempt, averaging 6.01.

The issue with Dobbins is he is not just splitting time with the recently extended Gus Edwards, but also Lamar Jackson — they both also finished in the top 11 in efficiency last season, with Jackson leading all players in yards per attempt. Not only will Dobbins have to maintain his efficiency, but he will be battling both Edwards and Jackson for the most valuable carries, the inside-the-5 carries. Last season, Edwards finished with 10 carries inside the 5, compared to 9 for Dobbins.

So Dobbins will be competing with carries with two extremely efficient runners, won't get all the goal-line carries, and plays with a mobile quarterback who doesn’t frequently target running backs. In fact, the Ravens only targeted running backs 62 total times last year, the second-lowest total of any team, the same number James White saw by himself last season. Dobbins saw 6.11% of the total targets and 38% of the running back targets; that is simply not enough volume to make up for the time share. Even remaining extremely efficient, Dobbins will have a tough time paying off his price tag with that workload

David Montgomery has an inflated price tag due to his 2020 late-season production. After the bye week, Montgomery scored 18 or more fantasy points in each of the final six games of the season. Prior to that, he had only scored 18 or more points once the entire season. He faced some of the worst run defenses in football and had the softest end of season schedule of any running back.

Montgomery has excellent contact balance and knows how to break a tackle, but he has never been an efficient back, and big plays have come few and far between. While the Bears like him in the rushing game, prior to last season they have never shown trust in him in the passing game, and they brought in former Chiefs running back Damien Williams this offseason to help hold down the fort until Tarik Cohen fully recovers from injury.

Looking at the above chart, we can see that in his career with Tarik Cohen, Montgomery has never had more than five targets and averages only 2.32 targets per game and 15 less receiving yards per game, per the FTN Splits tool. Paying a premium price for a runner who isn't going to be highly involved in the passing game on a below average offense is not something I ever look to do. Even when Justin Fields starts eventually and potentially opens up more holes using RPA, there is a long trend of mobile quarterbacks passing less to running backs. I don’t trust his receiving usage, efficiency or offense and he is an easy fade for me in the third round.