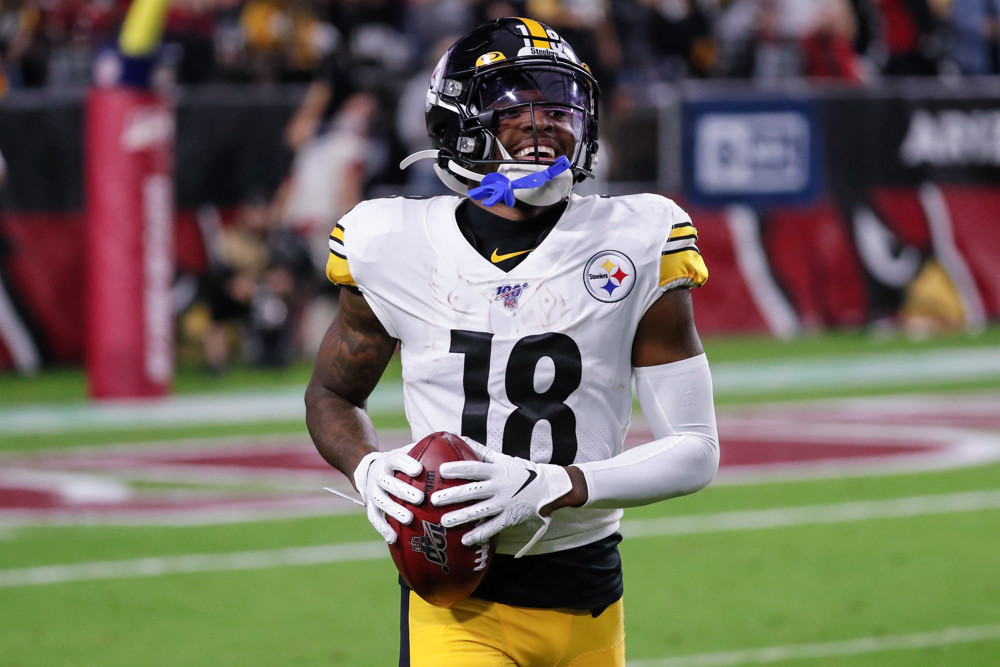 FTN's Eliot Crist identifies 5 wide receivers going outside of the first 4 rounds in fantasy football this year who make for good draft targets.

Earlier this week, I wrote up my 10 favorite players to take in the first five rounds of drafts. Receivers Stefon Diggs, D.J. Moore, Terry McLaurin and Tee Higgins all made the list, and you should try and leave you draft with those guys.

But I didn't want to write up the same players this time. So let’s look at five receivers outside of the first four rounds that you should be grabbing in your fantasy drafts this year that give you a perfect balance of floor and ceiling to come out victories each week.

A look at five receivers you should leave your fantasy football draft with in 2021.

The biggest thing you hear about Diontae Johnson is that he drops too many passes — he dropped 13.3% of his targets last year, per FTN’s Advance Receiving Stats Tool. However, drops only matter if the team cares, and the way Johnson was funneled targets, the Steelers clearly don’t.

The Pittsburgh offensive line is terrible. That meant Ben Roethlisberger and the Steeler passing game got rid of the ball quicker than any other team in the league to try and negate the line issues. This led to Johnson seeing insane volume, the exact thing we want in fantasy football. Last year, in games Johnson played 20 or more snaps in, he averaged 11.2 targets, 74.5 yards and 18.1 PPR points per game (per the FTN NFL splits tool) — that would put him in the top 10 among all receivers. Take advantage of the volume, and add Johnson to your teams.

2. Michael Gallup is a steal in fantasy football

The Cowboys offense is something you don’t want to ignore when building your fantasy football rosters. They were on a historic pace before Dak Prescott broke his ankle and have the makings of being able to replicate that success this year. The defense remains one of the worst in football, while the offensive line and Prescott are healthy and ready to air it out. Amari Cooper and CeeDee Lamb are the sexy names, but Michael Gallup is going much later and is a standout value.

Looking at the FTN splits tool, you can see Gallup’s production with Prescott came out to 76.6 yards and 0.37 touchdowns per game. With a healthy Dak, getting Gallup onto teams is a no-brainer decision at his current cost.

3. Marvin Jones is the best fantasy buy In Jacksonville

There are so many unknowns in Jacksonville, and it doesn’t end with who will be the Jaguars top receiver. Laviska Shenault will play the big slot role while Marvin Jones and D.J. Chark will battle it out for the role of the top option on the outside. Currently dealing with a broken finger, Chark is going 38 spots ahead of Jones, who finished last season as WR27 overall last season with the Lions.

Jones falls in drafts every year, and every year he outproduces his draft slot. He has not finished outside of the top 30 among receivers since 2016 and has nine touchdowns in three of the last four years. He is a big-play and red-zone threat who is going underdrafted this season — he has massive upside and could potentially lead the team in targets.

There is a lot to get excited about in Elijah Moore’s analytical profile. Since 2000, no receiver in college football has averaged more yards per game (157.1) in Power 5 conference play than Moore in his junior season. A five-star recruit coming out of high school, Moore broke out at the age of 19.4 (82nd percentile) after putting up 398 yards and 2 touchdowns playing alongside DK Metcalf and A.J. Brown — the same A.J. Brown who said he thinks Moore is better than him. He is an electric athlete with a 93rd speed score and 98th agility to score and a dynamic route runner.

Moore did fall to the second round in the draft, but historically that doesn't matter. In fact, since 2015, only 9% of first-round receivers have made the Pro Bowl, compared to 25% of second-round receivers. Moore was drafted by the Jets 34th overall but was reportedly the No. 16 ranked player on their board. He steps onto a bad roster, with the third-lowest projected win total, meaning he could see a ton of positive gamescript opportunities.

He will be the right-hand man for fellow rookie Zach Wilson, and they are said to have gotten off to an amazing start at minicamp and training camp. Moore has been the most uncoverable person at camp and every day he is said to have made an amazing play, with teammates calling him the fastest man on the team. He has a chance to be this year's Justin Jefferson.

5. Marquez Valdes-Scantling is a late-round flier

Marquez Valdes-Scantling saw 29.5% of the Packers’ air yard share last year (second on the team) and led all of football (min. 50 targets) with a 16.84-yard average depth of target. The Packers added Amari Rodgers in the draft, but he is much more of an underneath receiver and shouldn’t impact MVS much. While Valdes-Scantling has the weekly floor of the basement, he put together five top-24 WR performances and is a worthwhile end-of-draft best ball flier due to his big-play ability. While training camp reports can be misleading, the big-time athlete has been said to be putting together a strong camp and is the clear second option at receiver for Rodgers. If he can build on consistency, his big-play ability makes him a strong worthwhile flier at the end of drafts.