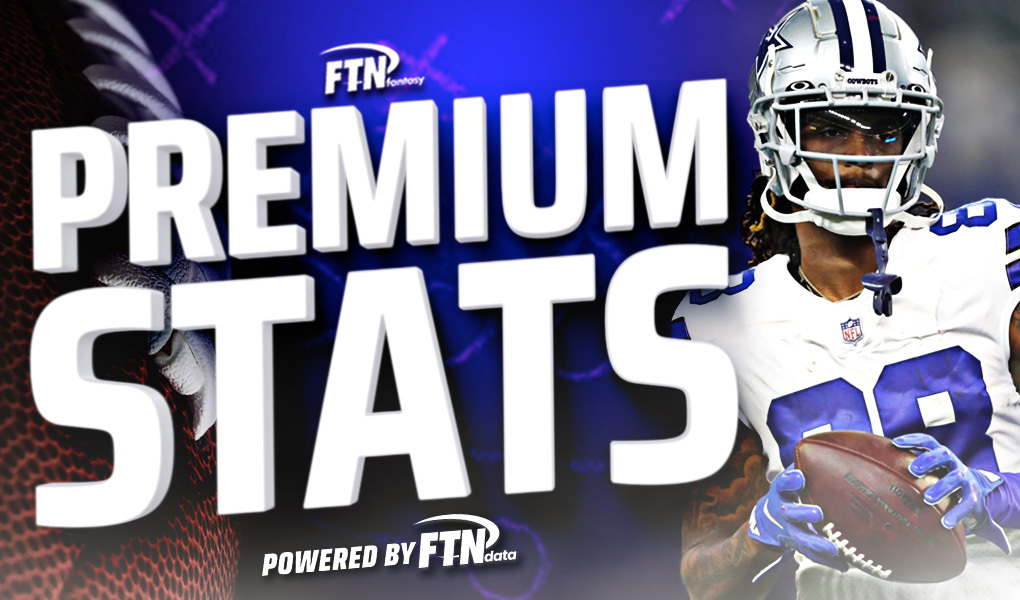 FTN breaks down the full slate of premium stats offering on FTN Fantasy.

FTN Fantasy has launched our Premium Stats as part of our FTN Fantasy Platinum package. With 35 new data tools, you won’t find a better value for data on the internet to help you win your fantasy leagues. Passing, rushing, receiver and defense — you want to know about it and we have got you covered. Advanced stats, advanced data, all in an easy-to-digest-and-understand format with conditional formatting and filters so you can see who is best at what, and who struggles where.

Filter passing data by dropbacks and attempts and see all of FTN’s advanced passing data. Adjusted completion percentage, yards per attempt, yards after catch percentage for a quarterback, interceptable passes, first-read passing percentage and plenty more. Advanced passing stats give you an understanding of what each quarterback in the NFL does best and how he stacks up with his competition.

Very few places have offensive line stats, fewer have the depth FTN offers. How often quarterbacks get pressured, hit and hurried all at your fingertips. FTN goes deeper than where an offensive line ranks, diving further into the percentile. Know how offensive lines pick up blitzes by number of pass rushers, how long a quarterback is given to throw, how dominant a line is in the run game and so much more.

Give the FTN Fantasy offensive line stats a look.

The deep ball — everyone's favorite play — is defined by FTN Fantasy as a pass attempt over 20 yards. How often are quarterbacks throwing deep, how good are they at it, and more can be answered in seconds with FTN’s deep passing stats.

Take a look at the FTN Fantasy deep passing stats.

The play action pass has proven to be one of the most effective weapons for NFL offenses, and now you can see which teams and players performed best in these situations. Of quarterbacks with at least 200 passing attempts, no one completed passes at a higher rate in 2020 than Ryan Fitzpatrick, while Drew Lock had the greatest increase in his passer rating. Understanding which quarterbacks thrive in these situations can give you a way up in your league to win a championship.

Broken down into multiple tools, they all can be used together. (A data visualization tool is in the works on this.) Every quarterback, running back, receiver and defense success and stats by direction of the field. Passing stats broken down by six directions: Deep left, middle and right and short left, middle and right. Rushing stats are broken down to run direction: left end, right end, left guard, right guard, left tackle, right tackle or up the middle. These tools help you find out where defenses are vulnerable and who the right players to attack that vulnerability are.

Give a look at the FTN Fantasy throwing outside the pocket numbers.

Quarterbacks vs. the blitz — NFL stats

While blitz remains one of the greatest video games of all time, it is also something that destroys quarterbacks or something they pick apart. Most quarterbacks in the NFL complete a lower percentage of passes against the blitz while most quarterbacks are also forced to get rid of the ball faster and have a lower average depth of target. FTN Fantasy’s QB vs. blitz stats allow you to not only see how a quarterback performs versus the blitz, but by each type of blitz. Whether it be man or zone blitz or exact number of defenders rushing, all the blitz data you could ever want is right at your fingertips.

See how quarterbacks perform versus the blitz.