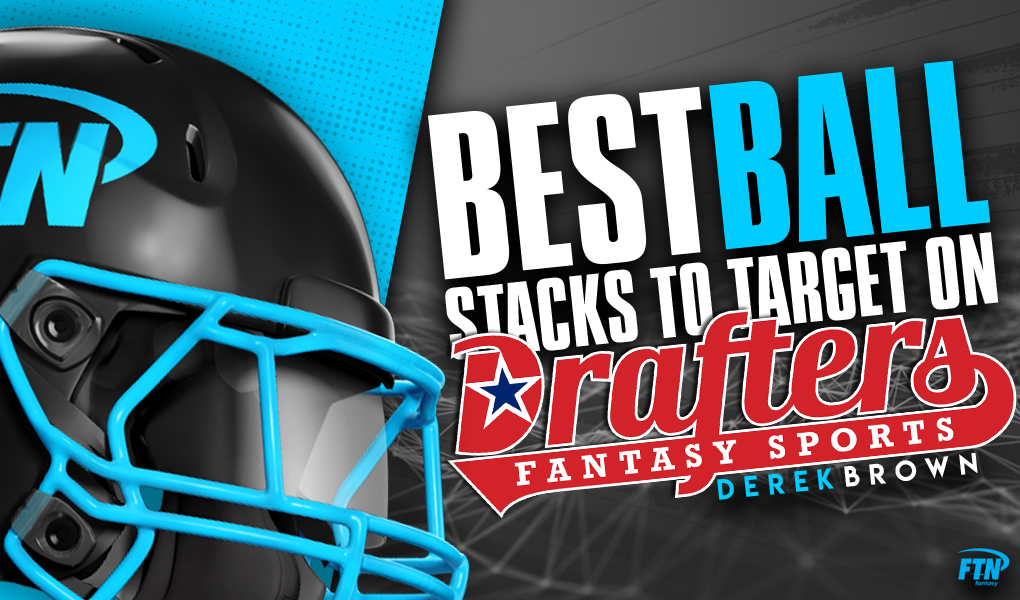 Stacking is one of the first fantasy football concepts usually mentioned when discussing best ball, and for very good reason. Especially if you’re entering into large-field tournaments against thousands of other people, the aim is to capture weekly upside and the lion’s share of production from a top-flight offense. The same theory is deployed in DFS lineups.

Several factors come into play when evaluating offenses to target on Drafters. ADP is near the top of the list, because if you’re not able to effectively roster the main cogs and possibly one tertiary piece of the offense you’ve set your sights on while still building a solid roster, you’re already sunk. The other two main factors I hold highly are the pace of play and passing rate, the latter being more key when looking at your quarterback and receiver combos. With all that being said, let’s look at teams that check these boxes on Drafters.

Last season, with Dak Prescott under center, the Cowboys obliterated the field in neutral-script pace (21 seconds per snaps) while ranking first in neutral-script passing rate (65%). This year, Dallas can pick up right where they left off with Prescott and a stacked roster. In Weeks 1-4, Prescott was the QB1 while Ezekiel Elliot was the RB5 and Amari Cooper the WR2 in fantasy points per game. The play volume this season will be mind-boggling. This offense could support three top-36 PPR wide receivers and top-five quarterback and running back options. There’s still equity in this stack as Prescott is being drafted as the QB5 (65.7 overall). Although CeeDee Lamb (WR10, 26.6 overall) and Cooper (WR14, 33.3) are pricy, Michael Gallup (WR38, 77.9 overall) is going too late.

A full season of Joe Burrow should do wonders for the Bengals' offense. With Burrow on the field last year, Cincinnati was tied with the Chiefs for 10th in neutral-script pace and led the league in neutral passing rate (64%). With varying practice reports coming out this offseason regarding Burrow (QB13, 115 overall) and Ja'Marr Chase (WR24, 48 overall), their ADPs are slipping as Tee Higgins (WR22, 46.7 overall) has surpassed Chase in drafts. If you're paying up for another stack, the Bengals are an easy secondary stack to fit around your primary. The target shares could be quite close for these three options, with the real differentiator being touchdowns. The time is now to draft more Bengals' stacks.

The Cardinals are another team with a blistering pace that we can target. Arizona ranked first in neutral-script pace last year (23.7 seconds per snap). Kyler Murray was destroying the opposition before shoulder woes slowed a monster season. In Weeks 1-11, Murray was a top-10 fantasy quarterback every week, with seven games inside the top five. Let that consistency and ceiling sink in for a second, because it’s bonkers. The stacking possibilities with Murray are endless. DeAndre Hopkins is expensive but still easy to fit (WR5, 16 overall). If you miss out on Hopkins, my favorite stack for Arizona is double-stacking Rondale Moore (WR57, 119 overall) and Christian Kirk (WR75, 166.2 overall) and enjoying the ceiling week opportunities at their cheap ADPs. If you want to mix in some A.J. Green (WR73, 163.7 overall), I don’t hate it. Moore has been electric this preseason as he’s been used all over the field. The variety of stacks you can build around this offense are enticing. As I outlined in my top five players to target on Drafters, James Conner is a priority in most of my drafts.

Drafting Josh Allen and Stefon Diggs garners a large share of this offensive output through the air and on the ground. Allen serves as the team’s goal-line back and directs an offense that ranked sixth in neutral-script passing rate (62%) last year. You’ll find Diggs near the top of every metric we care about for receivers. Last season, he finished third in target share (29%) behind only Davante Adams and DeAndre Hopkins and fourth in weighted opportunity (0.68) among all wideouts. Double stacking Allen (QB2) is easy as Cole Beasley (WR59, 128 overall), Emmanuel Sanders (WR63, 138.9 overall), and Gabriel Davis (WR61, 134.4 overall) are all found in the mid or later rounds of drafts.

The Rams will rebound this year with a massive upgrade at quarterback with Matthew Stafford calling the shots. With Goff stinking up the joint, Los Angeles dipped to 22nd in points per game (23.3) in 2020. In each of the three previous seasons, Sean McVay fielded top-10 scoring squads. The pace will pick back up, and the Rams will likely be inside the top five in total and neutral-script pace as they were in 2018. If choosing between one of Robert Woods or Cooper Kupp, Kupp is my favorite as he has the red zone role locked up. Late tertiary pieces of Stafford ceiling weeks are easily attainable, with Sony Michel, DeSean Jackson, Van Jefferson, Jacob Harris and Tutu Atwell near the end of drafts. Michel’s ADP will climb the closer we get to Week 1, but with the lean that he settles into the 11th or 12th round of drafts, he’s still a good value there.

Jacksonville Jaguars: Trevor Lawrence could continue the trend of rookie fantasy quarterback finishing inside the top 12 in weekly fantasy scoring. Lawrence possesses the cannon arm and mobility combo we seek in fantasy. Marvin Jones and Laviska Shenault are my preferred stacking options. Jones has been a target magnet this preseason, and inside Darrell Bevell’s offense, we have the clearest picture of his role for 2021.

Los Angeles Chargers: The stack options here are clear with a consolidated target tree. To start the Bolts party, pair Justin Herbert with undervalued options in Austin Ekeler and Keenan Allen early in drafts. Mike Williams carries multi-touchdown upside weekly and also made my top five players to target on Drafters article. If you miss out on Williams, grab his understudy Josh Palmer with your last pick. Palmer is a player to remember, especially in large-field tournaments. He’s the favorite to win the WR3 job for the regular season.