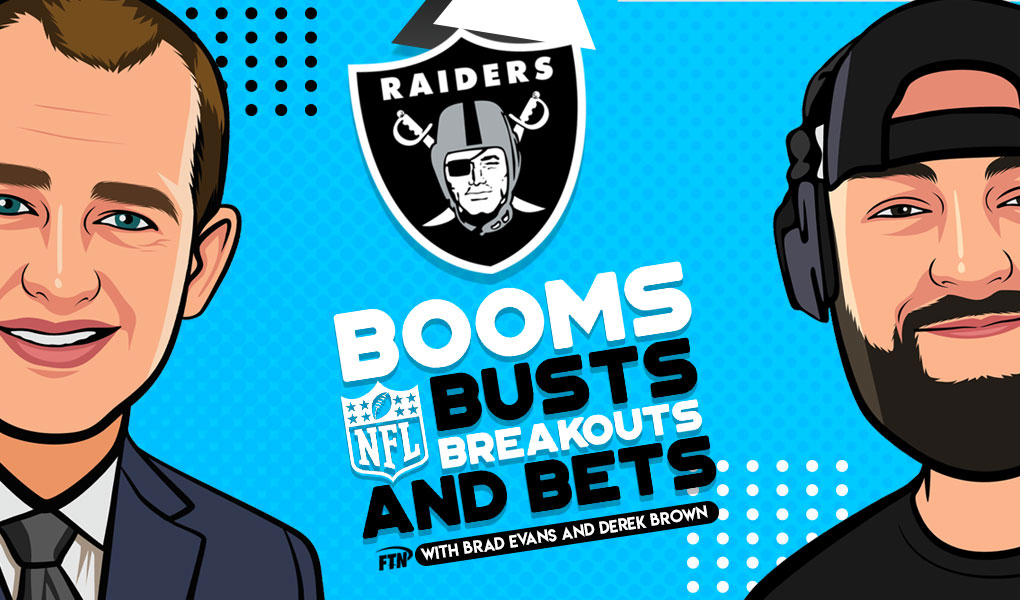 FTN's Brad Evans and Derek Brown offer up their picks for some of the key fantasy football names to know and picks to make on the Las Vegas Raiders in 2021.

Last season, Waller built upon his 2019 breakout, offering hope that at age 29, there still might be a higher ceiling yet to be realized. In 2020, Waller’s target share ranked behind only Davante Adams, DeAndre Hopkins and Stefon Diggs among all wideouts and tight ends. While he was gobbling up volume overall, there's still some meat on the bone with his red-zone usage to climb higher. He ranked seventh in targets inside the 10-yard line (11), but those targets accounted for only 26.8% (15th) of his overall target volume. Waller's volume isn't going anywhere, but if Derek Carr looks his way more in close, his touchdown numbers could climb even higher.

Waller is the discount version of Travis Kelce. Even comparing his production across other positions shows he's an elite fantasy option worthy of paying up for. In 2020 Waller would have been the WR8 or RB9 in fantasy points per game. This year, the Las Vegas zone-busting gazelle could reach another echelon with 1,300 receiving yards with 10-12 touchdowns. — Derek Brown

Instead of paying up for a luxury, top-of-the-line service or item, consumers often subscribe to the next best thing. Sure, it may not have every bell or whistle, but whatever acquired offers enough to get the job done.

As investors slap a heavy wallet for Travis Kelce in Round 1 or over-reach for George Kittle a couple of rounds later, those who subscribe to the above logic believe the Vegas tight end is a budgetary buy available at an affordable ADP (25.59, TE3). Their giddiness is warranted. Last season, Waller set the pace in position target share (28.0%), total red zone targets (24), receptions (107) and yards after catch (562). Most astonishingly, he also finished tops in unrealized air yards, meaning many additional fantasy points were left on the field.

With Nelson Agholor now in New England and many question marks attached to Vegas’ wide receiver corps, Waller is Derek Carr’s indisputable No. 1 vertical option. If the defense continues to be overly forgiving, repeating or even improving on last fall’s mammoth line (146-107-1196-9) is very much on the table. Selecting a RB and/or WR in Rounds 1-2 and then matching them with Waller is an ideal foundation to pour in drafts. — Brad Evans

For the now 1.46 average listeners — our numbers are surging — who turn in regularly to “Fade the Noise” on SXM, my colleague’s love affair with the former Alabama slammer is well documented. If given the opportunity, he would spoon the dude for hours on end. The attraction runs deep.

Sadly, if there’s one player with the most bust downside on this team, it’s unmistakably Jacobs. Say what you will about Kenyan Drake, but he’s a sharp thorn sure to bury in the side of the projected starting RB. Yes, Jacobs should reprise his red-zone role — his 23.8% RZ carries percentage cracked the top-10 last season — and is a threat for 8-10 TDs, but a minimized presence in the pass game, due to Drake, stunts his potential growth. His 67.2% opportunity share could shrink. Significant declines in YAC and missed tackle contributions witnessed last fall and question marks surrounding the Vegas offensive line only raises doubt. Chris Carson, David Montgomery and Miles Sanders are better options available at a similar ADP cost (RB20, 38.22). — Brad Evans

Jacobs has made his fantasy football living off monstrous volume. Last year, he ranked third in rushing attempts (273) and second in red-zone touches (65). With Kenyan Drake arriving in Las Vegas, both of those marks are going to take a hit.

With Jacobs' volume taking a hit, he will need to compensate with efficiency. If 2020 is a fair barometer of things to come, his ability to sap every ounce of production from his workload is waning. Last year Jacobs ranked 43rd in breakaway run rate and 53rd in yards per touch. Mike Davis and Myles Gaskin are both being selected within ten picks of Jacobs and don't have the workload concerns. Give me either over the weekly Raiders running back committee headache. — Derek Brown

Fantasy Football Breakouts for the Raiders

Injuries derailed Edwards' rookie season even before he arrived in the NFL. He was unable to attend the combine and test because of a broken foot. For a player who never surpassed 900 yards receiving and was unable to show off his athleticism before the NFL Draft, being selected in the third round was a telling insight into the prowess he put on film. Edwards was an elite analytical prospect with a 94th percentile college dominator and 100th percentile breakout age.

Entering his sophomore season fully healthy with only John Brown, Henry Ruggs and Hunter Renfrow as competition for targets, he can cement himself as the No. 2 option behind Darren Waller. Edwards is one of my favorite final picks in redraft and best ball this year. — Derek Brown

As the fantasy obsessed marveled at the well-defined thighs of Mike Davis and Giovani Bernard on social media, Edwards was in the gym banging out curls. Flexing for the cameras during Vegas mini-camp, his body-by-Bryan bicep snapshot sparked an equal frenzy among virtual gamers. It’s possible the numbers could soon match the hype.

Edwards was a tackles-breaking machine at South Carolina. On film, he routinely popped ripping through contact for chunk gains. It’s for that reason why many jumped on the bandwagon last season, predicting a deep immediate impact. Well, that never materialized. In nine forgettable games, he totaled a measly 15 targets, catching 11 passes for 193 yards and 1 TD.

It’s easy to write him off, but his opportunity path remains mostly unobstructed. John Brown’s arrival muddies the waters some and Las Vegas targeted receivers only 43.4% of the time in 2020, but Henry Ruggs is a complete wild card and the Raiders aren’t exactly stout defensively. The odds may be stacked against him, however, impress in camp and he could sew up a starting gig. Draft and stash late (211.78, WR79 ADP). — Brad Evans

Best Bets for the Raiders 2021

With a defense that will still be among the worst in the league and facing the third-hardest projected NFL schedule, I'll easily take the under here. — Derek Brown

Piggybacking on DBro’s comments, the difficult slate combined with various soft spots point to one conclusion only. However, play the hook at the one ‘book that’s offering it. — Brad Evans