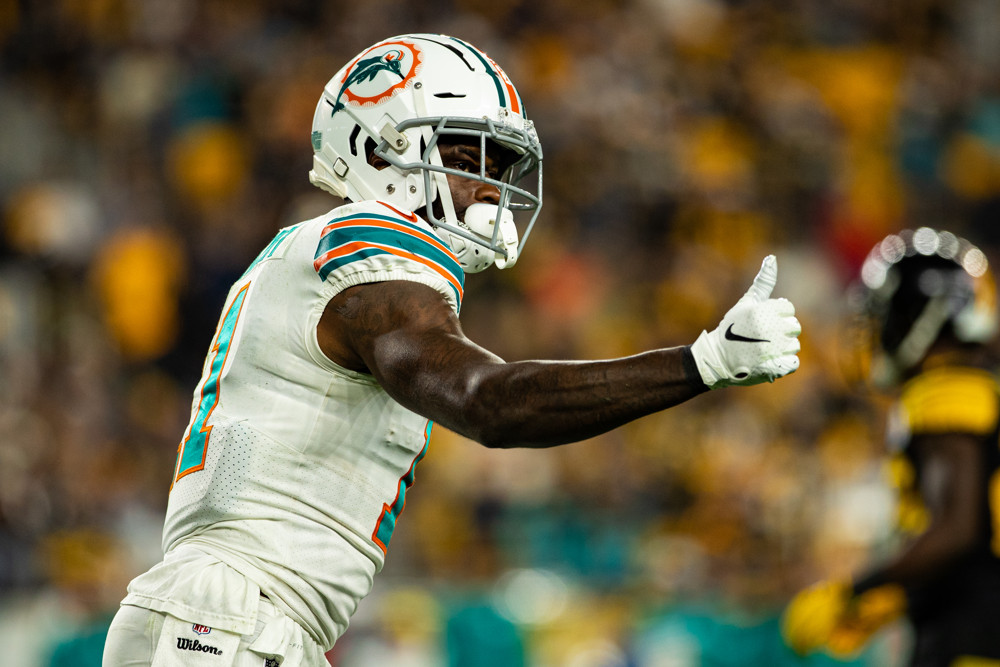 FTN's Derek Brown utilizes the FTN Splits tool to identify some of the sneaky-best situations for DFS and fantasy football in Week 13 of the NFL season. 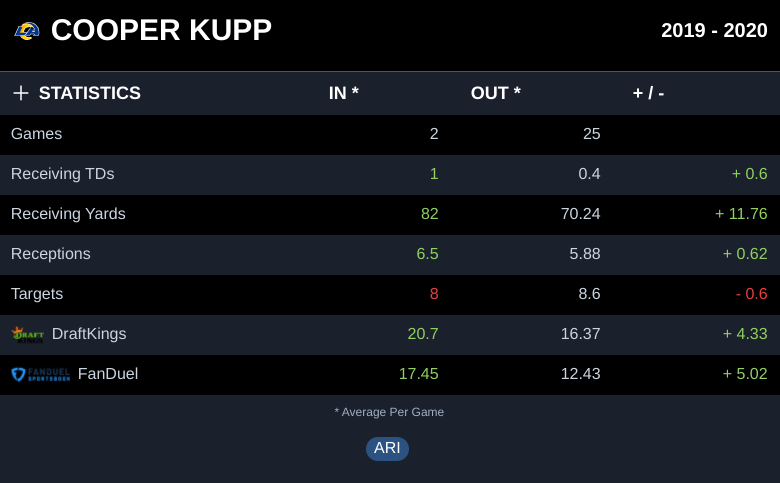 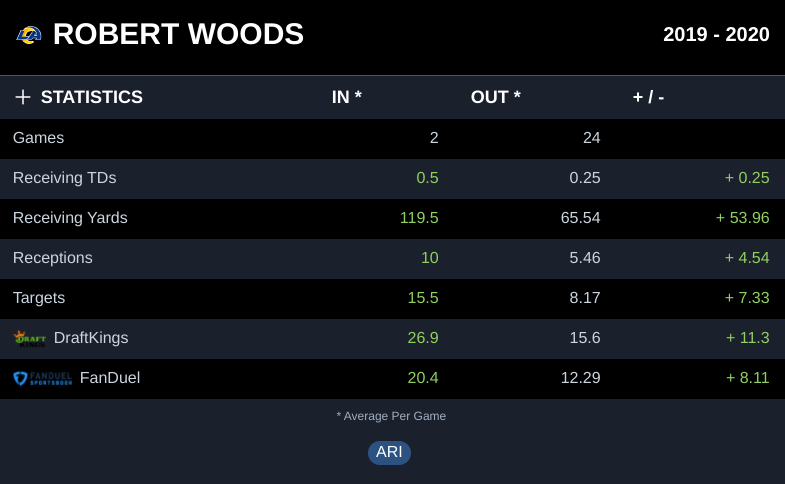 During Kliff Kingsbury’s tenure with the Cardinals, Woods and Kupp have destroyed his pass defenses. This week could be more of the same. Kupp and Woods will match up with Dre Kirkpatrick and Byron Murphy for the majority of their snaps. Kirkpatrick and Murphy have combined to allow a 68.9% catch rate on 119 total targets. Kupp and Woods will run 43-60% of their routes from the slot. Per our Advanced DvP-WR tool, Arizona has allowed the fifth-most yards per game (74.3) and seventh-most fantasy points per game (16.4) to opposing slot wide receivers. 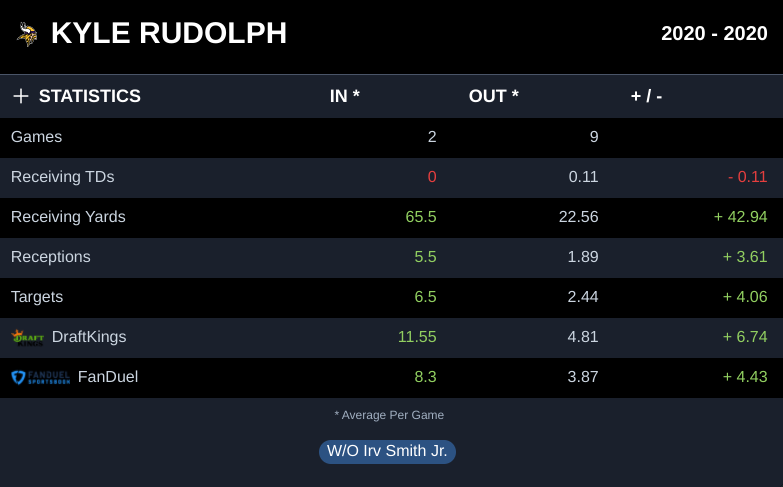 With Irv Smith Jr. out again this week, Rudolph will be a key cog in the Vikings’ passing offense. The matchup sets up for Rudolph to smash his modest price ($3,400) on DraftKings. The Jaguars have allowed the 11th most receiving yards (594) and most receiving touchdowns (9) to opposing tight ends. Even with the return of Adam Thielen, when the Vikings get inside the 20 if they are passing, Rudolph will likely be the second option that Kirk Cousins turns to. Before Thielen’s absence last week, Justin Jefferson hadn’t seen a red-zone target since Week 6, whereas Rudolph was targeted twice over that span. 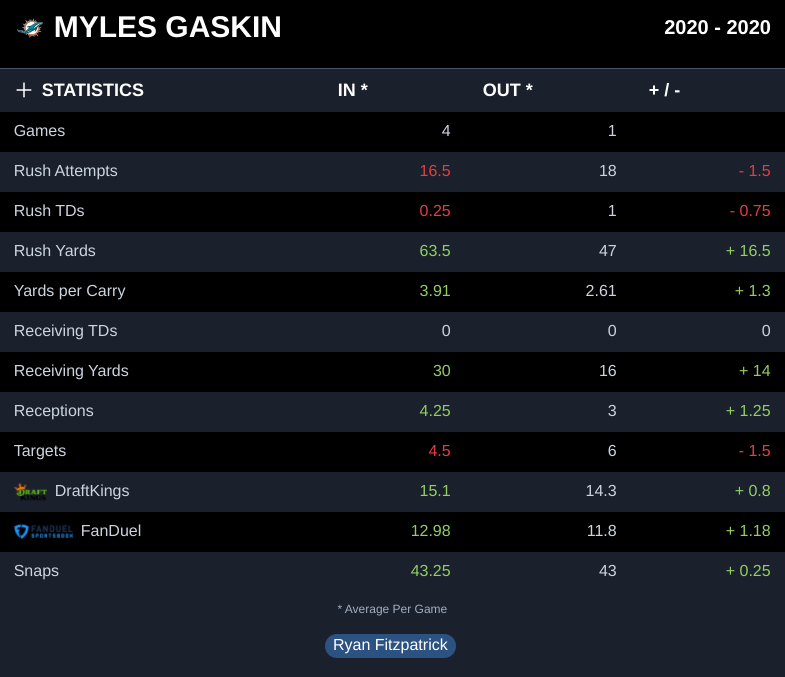 Matt Breida on the COVID-19 list and, DeAndre Washington and Salvon Ahmed listed as doubtful, all paved the way for Gaskin to return to a workhorse role possibly. Gaskin, with Ryan Fitzpatrick as the starter, was averaging 15.1 DraftKings points per game. If Gaskin is returning to a 15-20 touch workload, the matchup is right for a ceiling week. The Bengals have allowed the third-most rushing yards (1,318). Cincinnati is ranked 32nd in adjusted line yards, 27th in second-level yards, and 23rd in open field yards allowed. If Gaskin is ready to rock, he’ll make sweet music this week. 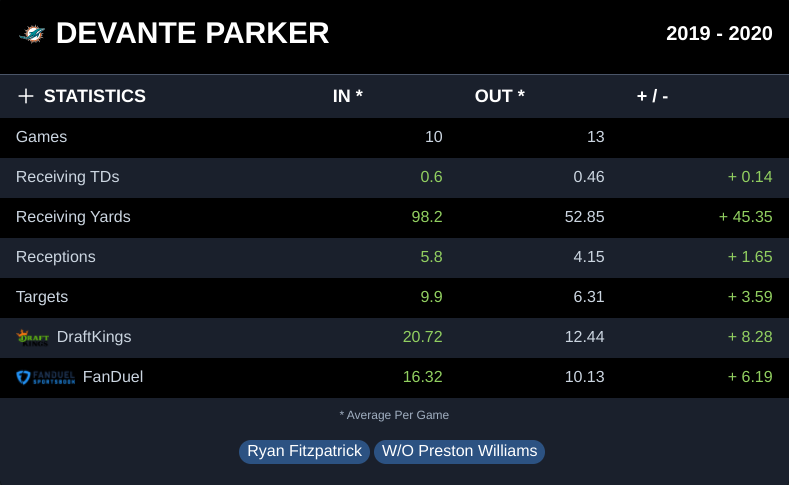 If Ryan Fitzpatrick is the starter again this week, Parker is set to fill up the stat sheet. Over the last two seasons with Fitzpatrick as the starter and no Preston Williams in the lineup, Parker has averaged 98.2 receiving yards and 20.7 DraftKings points per game. Parker will see LeShaun Sims on approximately half of his routes this week. Sims has allowed a 79% catch rate, four receiving touchdowns and a 129.7 passer rating in his coverage.