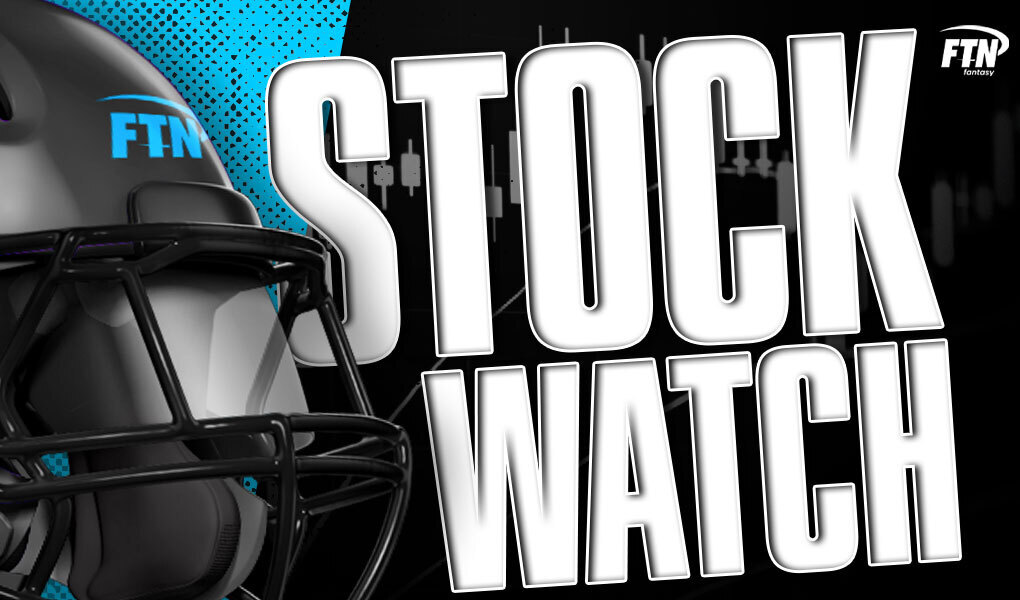 FTN's Chris Meaney takes a look at which players have rising and falling ADPs in fantasy football.

The goal here is to identify which players have rising and falling ADPs in fantasy football as we inch closer to the NFL season. I’m looking at NFFC high-stakes drafts that have taken place over the past couple of weeks. Below you’ll see a list of players who have seen their draft stock rise from late June to mid-July.

I scanned the average draft position of each player at every position in NFFC drafts from June 21st to July 5th, and from July 5th to July 21st. I also looked at the past two days as the football world lost Cam Akers for the season due to a torn Achilles.

Last week I touched on the movement of players such as Trey Lance, Javonte Williams, Tee Higgins, Elijah Moore, Ben Roethlisberger, Miles Sanders and others. A lot of those players continue to trend in a similar direction.

Darrell Henderson is your biggest riser this week and although we only have 48 hours of draft data to look at, it’s clear he’ll be one of the biggest risers in the offseason. Los Angeles Rams’ sophomore running back Cam Akers suffered a season-ending Achilles injury, which has not only resulted in a boost in Henderson’s ADP, it’s changed the Rams’ NFC West odds to win the division and their odds to win the Super Bowl (12-1 to 14-1).

In NFFC drafts from July 1st to July 19th, before Akers went down (sad face), Henderson was getting drafted as the 46th back on average at an ADP of 128. His min. pick was 98 and his max was 168. He was a 10th round pick on average and a good flier for those who attack the wide receiver position from rounds three-to-nine.

In drafts over the last 48 hours, Henderson has leapfrogged 23 backs and has been taken on average with the 50th pick. He’s RB23 ahead of Myles Gaskin, Kareem Hunt, James Robinson and Mike Davis, and behind Chris Carson, Travis Etienne, Josh Jacobs and Javonte Williams. Henderson has a min. pick of 48 and a max of 55 over the last two days.

It's obviously a small sample size of drafts but it seems like a fair price to pay considering he’s ranked as high as 15 and as low as 25 over at FTNFantasy. I have him at RB 21 in PPR formats and RB 22 in half-point settings. To be honest, I probably won’t have a lot of shares of Henderson if he moves inside the top 20 at the running back position.

It’s unclear if the Rams will bring in a depth piece like former Los Angeles running back Todd Gurley, or other veteran backs such as Le'Veon Bell, Adrian Peterson or Duke Johnson. It’s hard to imagine any of them bringing more to the table than Henderson. The Rams are up against the cap, and they seem to be happy with some of the depth pieces they have on their roster. This year's camp will be extra important for running backs Xavier Jones and Raymond Calais.

Henderson totaled 624 rushing yards on 134 attempts (4.5 YPC), scored six total touchdowns and caught 16 balls on 24 targets over 15 games in 2020. He emerged as the Rams’ starting running back to begin the season, as he averaged 12.4 carries and 58.7 rushing yards per game over his first seven contests. That includes just three yards on six carries in Week 1. From Week 2 to Week 7, Henderson averaged 16 opportunities and he had double-digit carries in five of those six games. He only had double-digit carries in two of his final eight games while averaging 12.2 opportunities.

He just flat out lost his job to a better running back in Akers who the Rams drafted in the second round. That's not to say Henderson didn't do some good things. Henderson dealt with a high-ankle sprain towards the end of last season but before Cam Akers took over, Henderson was one of the league’s best in explosive runs and he led the Rams in goal-line carries which is extremely valuable in fantasy football.

We’ll check in next week as more drafts take place to see where Henderson’s ADP sits, but it’s fair to say he’ll be off the board between Round 4 and 5, at the latest. For more on the outlook of the LAR backfield, check out Jeff Ratcliffe’s latest piece and if you already drafted Akers, our Derek Brown has you covered on what to do.

Mike Williams has only moved ahead of Michael Gallup and Jaylen Waddle at the wide receiver position, but he’s inching forward inside the top 100 overall. Williams had a min. pick of 91 in June drafts and his max was 134. Over the last two weeks, Williams’ min. pick is 82 and his max is 128.

There are plenty of reasons to like Williams despite just 97 catches and seven touchdowns over his last two seasons. The upside is extremely high, as he’s just two years removed from a 1,000-yard season and a league-high 20.4 YPC mark. His 15.8 yards per catch last season ranked 10th and sixth among wideouts with 48 catches. His 14.54 aDOT in 2020 ranked second and his 1,236 air-yards ranked 26th among wideouts with 63 targets.

The former first-round pick in 2017 is entering his sixth season in the league and his second with superstar QB Justin Herbert who is being drafted as a top 10 quarterback. It's very possible Herbert and Williams build off a strong finish in 2020.

Jalen Hurts hasn’t fallen too far down draft boards of late but Tom Brady and Aaron Rodgers have jumped ahead of him. I expect Rodgers to continue to climb as we get closer to the season and it becomes clear he'll play in 2020. I don’t expect Hurts to fall too much further unless the Deshaun Watson rumors continue to ramp up.

There are some questions about Hurts' ability as a passer but his rushing upside makes him a very appealing target in fantasy football. The Eagles’ QB racked up 295 rushing yards and three rushing touchdowns in the final five games (three starts) of the season and he had two 300-yard passing games in his last three games. Keep in mind, he was pulled in the final game of the 2020 season. Our projections have him for 700 rushing yards and 318 fantasy points which puts him at QB9.

There's been a slight decline in Beasley's ADP over the past couple of weeks. Not so much at the WR position, but he's dropped almost a full round this month and his max pick has gone from 213 to 244. There seems to be a bit of uncertainty when it comes to Beasley and I'm not sure if he's dropped a spot with each tweet but his exchange with Mark Cuban probably doesn't help his stock. It's easy to forget the 32-year-old set career highs in targets (107), receptions (82), and yards (967) last season. Beasley finished as WRR 27 last season and he should be viewed as a solid FLEX play as long as he's healthy and catching passes from Josh Allen. No surprise Gabriel Davis has moved up a tad.