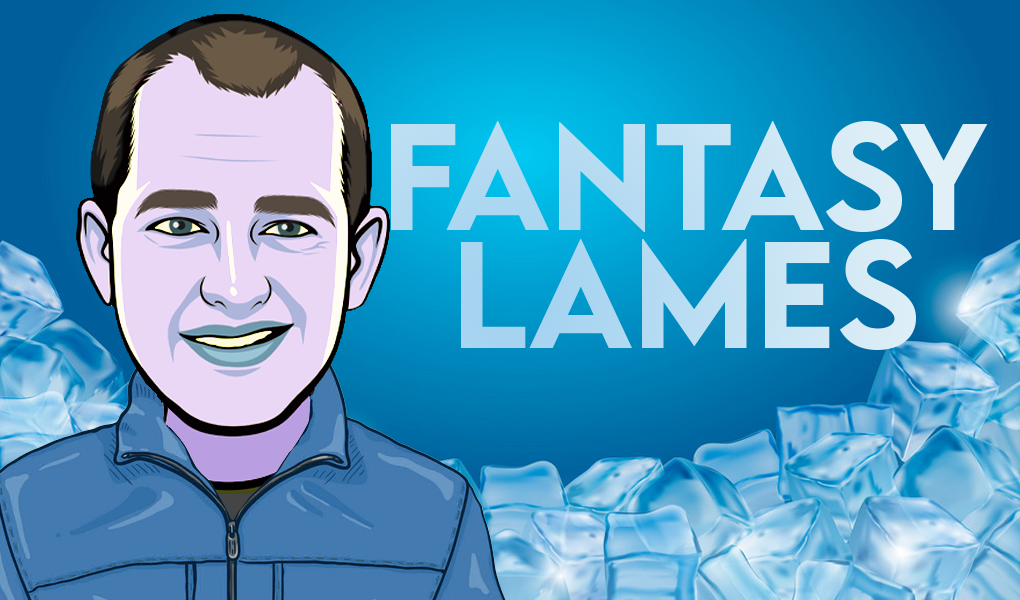 Week 6 fantasy lames: No frisky feelings toward Mixon at Indy

FTN's Brad Evans offers up his fantasy lames for Week 6, the players he expects to come in below fantasy expectations.

Each week the Noise highlights 10 somewhat un-obvious names who he believes will leave egg on his face. To qualify, each player must be started in at least 50% of Yahoo leagues. Speaking as an accountability advocate, I will post results, whether genius or moronic, the following week using the scoring system shown here (Thresholds – QB: 18 fantasy points, RB: 12 fantasy points, WR: 11 fantasy points, TE: 10 fantasy points). If you’re a member of TEAM HUEVOS, reveal your Week 6 Lames via Twitter @NoisyHuevos.

Blindsided. This is how most in the fantasy community feel about Ryan. Though No. 1 in attempts per game and, when at full strength, featuring targets — Julio Jones, Calvin Ridley, Hayden Hurst and Todd Gurley — Carson Wentz would commit a capital crime for, Ryan has underwhelmed terribly. He’s QB17 in adjusted completion percentage, QB20 in deep-ball passer rating and QB26 in red-zone completion rate. In other words, he’s the median, a player who’s only average simply due to volume. Droppable for the likes of Ryan Fitzpatrick, Gardner Minshew and Joe Burrow, he isn’t the cemented QB1 most stubbornly believe.

Similar to the formula a week ago, the now Raheem Morris-led Falcons are sure to lean on a rejuvenated Todd Gurley to add balance and move the chains. Minnesota, which ratcheted up pressure on Seattle last week, will dial up the heat on Ryan, who’s been placed under duress on 29% of his dropbacks. To deflect the discomfort, a heavy dose of Gurley will be implemented as Minnesota has allowed 4.52 yards per carry to RBs. Of course, Atlanta’s pliant defense could abandon the gameplan forcing Ryan to chuck balls without restriction, but projecting his fourth-straight sub 18-point fantasy showing is entirely reasonable.

Mixon’s on-field bipolarity has caused the pendulum of emotion to swing wildly. One week he triggers a state of euphoria, rewarding steadfast backers with three touchdowns. The next, he crashes into an unbreakable steel wall, causing those same supporters to endure unwanted pain and anguish. Without a trustworthy offensive line in front of him and knowing his role as a pass catcher is occasionally minimized due to Zac Taylor’s insistence on using Giovani Bernard, the once-prized fantasy first-rounder has become entirely matchup dependent. His 2.61 YAC per attempt (RB34) and 16.7% missed tackle rate only further uninspire. Though a rare workhorse back (24 touches per game), his hollow touches, sadly, are par for the course.

This week, frustrations for Mixon zealots are sure to mount. His opponent, Indy, has yielded just 3.73 yards per carry, 103.2 total yards per game, two combined TDs and the second-fewest fantasy points to rushers. If tackling machine Darius Leonard returns to the lineup, few holes will materialize. Even if he doesn’t, DeForest Buckner, Grover Stewart and Anthony Walker are talented enough to pick up the slack. The trio has tallied 29 tackles for loss versus the run. In other words, Mixon won’t be the cat’s meow.

Flukes happen. Whether it’s odd bounces by an oblong ball, catastrophic injuries caused by an unforeseen and unavoidable act, Randy Johnson accidentally annihilating a random bird with high-90s heat or seeing Howard the Duck (Really, Ochocinco?) trend on Twitter, randomness crops up from unlikely places. Vegas’ takedown of KC on the road and Miles Sanders shooting through a monster-wide gap in Pittsburgh’s normally phalanx-tight defensive line en route to a 74-yard TD scamper are additional examples. Disagree? The Philly rusher notched a “stellar” six yards on his other 10 carries. Yep, serendipitous for sure.

Strength on strength is the headline between Browns and Steelers, a storied intradivisional rivalry. Cleveland’s seemingly unbendable offensive line is tops in fewest adjusted line yards allowed. Pittsburgh, meanwhile, is equally inflexible, No. 1 in adjusted line yards surrendered on defense. Unless Baker Mayfield morphs into peak Bernie Kosar, the advantage leans toward the home team. On the year, the Steelers have conceded a lowly 3.19 yards per carry, 85.0 total yards per game, four total TDs and the fourth-fewest fantasy points to RBs.

With Nick Chubb sidelined, Hunt let the 2018 genie out of the bottle last week against Indy. On 23 touches, he amassed 93 total yards and a score. Sensational in key categories in YAC per attempt (3.69, RB7), missed tackle rate (22.2%) and yards created per touch, he’s been one of the most profitable RBs in the virtual game. Still, the matchup warrants trepidation. 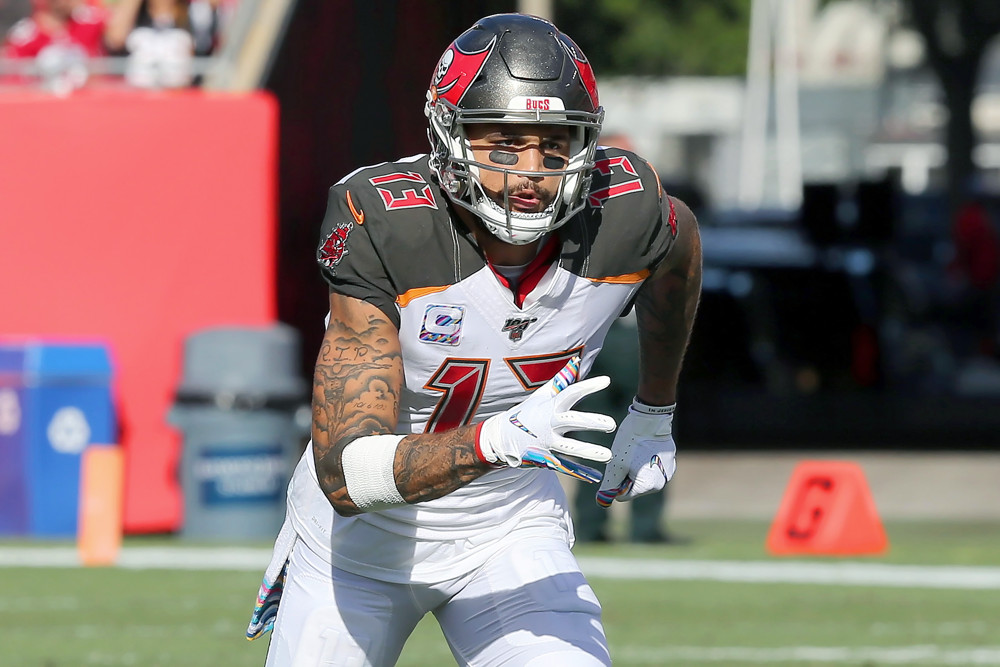 The annual Evans family pumpkin chuckin’ extravaganza is officially on hold. Mike, a distant cousin who is three times removed (Not really. Maybe. OK, I need Ancestry.com.), likely won’t attend after making the Lames list. However, it’s deserved. Hobbled by a mild high ankle sprain, he’s fought through the pain and gutted out the past couple games, visibly lacking his usual downfield explosiveness and separation. Until he can push without inhibition, the lanky receiver will continue to work mostly in the short-to-intermediate field, an unusual turn of events from his typical aDOT-stretching routes. More bizarre 2-2-2 lines could become commonplace.

In what’s forecasted to be one of the highest-scoring affairs on the Week 6 docket, Evans may need an end-zone grab to salvage WR3 numbers. Packers DB Jaire Alexander has developed into one of the game’s premier blankets. Over four games, he’s yielded only a 71.2 passer rating and 0.66 yards per snap to his assignments. His batterymate Chandon Sullivan has also performed at a high level giving up a 69.1 passer rating. Alexander shadowed Adam Thielen and Calvin Ridley earlier this season. Even if Chris Godwin returns, a similar fate awaits the banged-up Buc.

There’s Indy car speed. There’s Usain Bolt speed. Then there’s what Tyreek freakishly exhibits carrying 10-12 pounds of equipment on his frame. The man is Sonic the Hedgehog in red, an absolute blur who spins his wheels at an almost cartoonish pace. It’s easy to grasp why he ranks top-15 in total air yards, air yards percentage and yards after the catch. Morphing into a true consistency king, he’s scored in every Chiefs game thus far, beating opponents to the chalk whether by air or ground. Only DK Metcalf, Adam Thielen and Calvin Ridley have outpaced him in 0.5 PPR points per game.

No player, even one with Hill’s remarkable tools, is immune from a down week. Last season, the wideout fell short of the proposed ‘Flames/Lames’ threshold five times. He’s due for a letdown, which is certainly plausible this week against Buffalo. Tre'Davious White lurks. Often utilized in shadow coverage, he has the tall task of trying to match Hill step-for-step. Friendlier compared to years past, the decorated corner has given up a 128.1 passer rating and 0.81 yards per snap to his assignments. Buffalo, due to its enforcement of over-the-top coverage, typically doesn’t give up many chunk gains vertically. It’s why it’s allowed just 9.8 yards per reception to WRs. Calculating the math, Hill’s odds of blasting the competition are minimized.

RB: Miles Sanders, PHI (Line: BAL -7.5; DK: $6,600) — Without much room to breathe, Sanders, despite the obstacles, is essentially where he was expected to be, slotting in at RB14 in 0.5 PPR formats. It’s a rather amazing achievement when weighing the circumstances. His offensive line is in tatters, gamescripts mostly haven’t gone the Eagles way and his underlying profile reeks of mediocrity (11 missed tackles on 73 touches). If not for the improbable 74-yard home run hit last week against Pittsburgh, feelings toward Sanders wouldn’t be nearly as bullish. In the midst of a brutal three-game stretch, he’s sure to earn steady RB1. This week, however, expect middling production. Baltimore has allied 3.61 yards per carry, 127.2 total yards per game, two TDs and the fourth-fewest fantasy points to RBs. (FF: 16-57-4-20-0, 9.7 fantasy points)

WR: Julio Jones, ATL (Line: MIN -3.5; DK: $6,700) — Soft-tissue issues are the bane of my existence, especially when crippling one of the game’s most consistent weapons. Julio, rostered in too many personal leagues, has only widened the runways on my hair-evaporating dome. He’s attempting to fight through a hamstring injury, but, in all honesty, the training/coaching staff should shut him down for a week or two. If he cowboys up and plays this week, he’s difficult to trust. Yes, the Vikings haven’t earned their pickled herring defensively coughing up 8.3 pass yards per attempt and the fourth-most fantasy points to WRs, but fears of reinjury greatly damper Julio’s potential. Reduce the risk. (FF: 4-46-0, 6.6 fantasy points)

WR: Robby Anderson, CAR (Line: CAR -2.5; DK: $6,300) — Anderson may have no clue what the lyrics are to “Sweet Caroline,” but he certainly knows how to carry a tune on the field. Churning out a massive profit for those who targeted him in the double-digit rounds, he’s eclipsed the 100-yard mark in three of five contests. Currently WR10 in air yards percentage (35.2) and WR10 in YAC per reception (6.31) he’s bolted past D.J. Moore as the go-to weapon for Teddy Bridgewater. But this week could be his quietest effort to date. Chicago’s secondary is legit ferocious. The Bears have surrendered 6.4 pass yards per attempt and the second-fewest fantasy points to WRs. Whether exchanging greetings with Kyle Fuller (59.4 passer rating, 0.82 yards per snap allowed) or rookie Jaylon Johnson (85.5, 1.27), earlier good times will never seem so good. (FF: 4-62-0, 8.2 fantasy points)

WR: A.J. Brown, TEN (Line: TEN -5.5; DK: $5,600) — Alex Smith’s game action was the warmest and fuzziest feeling of Week 5 in the NFL. However, the Titans’ return was the most thankful, controversy included. He was physical, pugnacious and peppy in Tennessee’s throttling of Buffalo. Taking advantage of Tre'Davious White’s absence he was targeted nine times, catching seven passes for 82 yards and a TD. Josh Norman, who Derrick Henry stiff armed into an early grave, was simply outmatched. This week, Brown tosses jabs with Bradley Roby who has given up a mere 0.76 yards per snap to his assignments. If Corey Davis remains on the COVID-19 list, it enhances Brown’s chances of downing this prediction. Still, only four WRs have surpassed 75 yards versus Houston this year. (FF: 5-66-0, 9.1 fantasy points)

TE: Tyler Higbee, LAR (Line: LAR -3.5; DK: $5,100) — Back in August, Higbee partisans brushed off the view Gerald Everett, despite all of the empirical data presented, was a threat. In 14 games with Everett on the field stretching back to last season, the perceived top-10 tight end has averaged 3.2 receptions per game and 30.6 yards per game while scoring one touchdown. The Niners are hurting at multiple key defensive spots, especially guarding the pass. Still, they’ve surrendered one touchdown and only one 40-plus yard producer (Mike Gesicki). Given his dwindling role (8 targets over the last three games), he’s completely unreliable. Truth be told, dressing up as “sexy” hand sanitizer for Halloween is a better idea than starting Higbee. (FF: 2-29-0, 3.9 fantasy points)