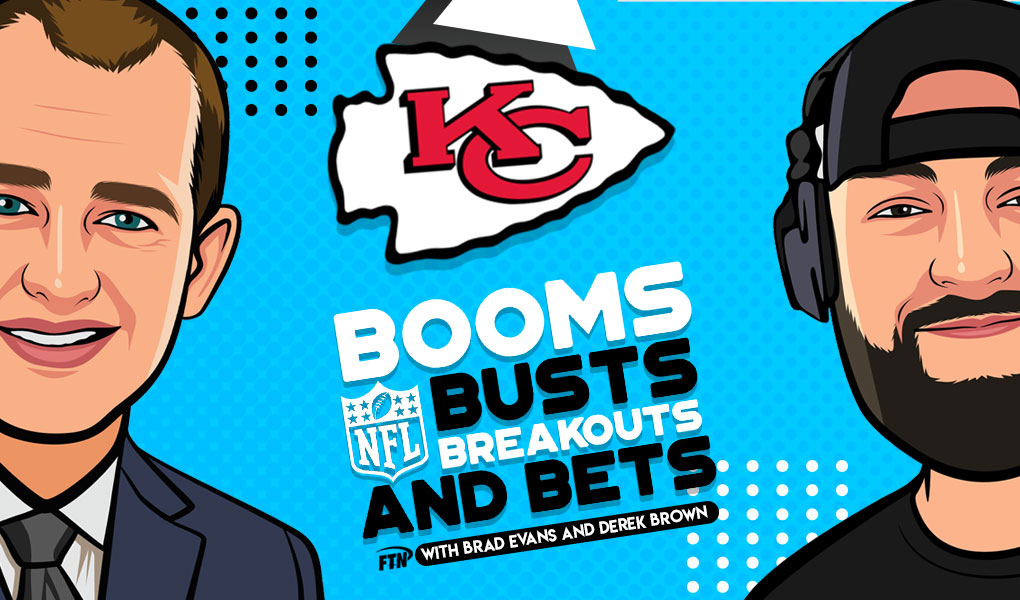 FTN's Brad Evans and Derek Brown offer up their picks for some of the key fantasy football names to know and picks to make on the Kansas City Chiefs in 2021.

Hill has firmly established himself as an all-world talent at the wide receiver position capable of winning at all levels of the field. Last season, he ranked second in deep targets (32) and seventh in red-zone targets (18) while also flashing elite efficiency. Kansas City's human blur ranked 14th in yards per route run among receivers.

Hill is ready to run it back as a top-three fantasy football wideout after finishing last year as the WR2 in fantasy points per game. Hill's pricey ADP as the WR1 (9.1 Overall) is well warranted. At age 27, in a high-flying offense tied to Patrick Mahomes, he's set to smash again in 2021. — Derek Brown

The decorated tight end is to the position what Simone Biles is to gymnastics, an unrivaled G.O.A.T. Sure, Kelce may not be able to complete never-before-seen maneuvers on the floor exercise, but his steady accomplishments label him a consistency king. The premium he brings to the position is unmatched. It’s why selecting him in the back half of Round 1 is completely warranted.

A marvel statistically, he’s caught at least 97 passes, topped 1,220 yards and totaled 26 TDs over the past three seasons. His 260.1 accumulated half-PPR points a season ago outpaced the second-best fantasy TE, Darren Waller, by 33 points. Lump together TEs and WRs and he only trailed Devante Adams, Tyreek Hill and Stefon Diggs in total output. And he missed a game. Additionally, he was No. 1 or No. 2 in total air yards, red-zone targets, yards per route run and yards after the catch. Tally it up and there are no signs of him slowing down. — Brad Evans

CEH is the Bitcoin of fantasy football. People — probably the same backers who confidently invested a Round 1 pick in his services — will buy into the hype, spend exorbitant capital to acquire, hold for entirely too long and wind up finishing well into the red. Yes, he should take a step forward from last year’s deflating rookie campaign in which he finished RB20 in PPR points per game, but the increasingly bullish market is sure to raise his ADP to a profitless level.

To be fair, there are encouraging signs for CEH outside of the obvious point of “He’s the likely starting RB in the league’s best offense.” A season ago, his 16.0 red-zone percentage ranked RB12. He also tucked inside the position’s top-12 in total breakaway runs (8) and yards per reception (8.2). Still, he finished outside the top-20 in YAC per attempt (2.98) and yards created per touch (1.40). And let’s not forget the glowing remarks the coaching staff had for Darrel Williams last year. He’ll likely play a bigger role than most anticipate. Add it up and Antonio Gibson and David Montgomery are finer options available at a similar price point. — Brad Evans

The Hardman hype train looks to be leaving the station again this year, but fantasy gamers could be disappointed yet again. The ADP has not caught up to Hardman yet, but it takes one practice video of Mahomes tossing him a deep shot to fan the flames under his ADP.

Hardman had ample opportunity to seize a larger role in this offense last season with Sammy Watkins sidelined, but we never saw that materialize. In the six regular-season games Watkins was sidelined, Hardman averaged 3.1 targets and 40.3 receiving yards per game. Over that stretch, he ranked fourth among wide receivers in routes, with replacement talents like Demarcus Robinson and Byron Pringle eclipsing him in routes. Hardman hype could be deafening again the closer we get to Week 1, and if that happens, I'll be looking in other directions in drafts. — Derek Brown

Fantasy Football Breakouts for the Chiefs

Behind a rebuilt Kansas City offensive line, Edwards-Helaire is primed to set the world on fire in his sophomore campaign. The Chiefs' front five were putrid at springing their rookie runner to daylight, ranking 30th in open field yards per Football Outsiders. Despite Edwards-Helaire's tackle-breaking prowess, he fought an uphill battle against lightboxes behind this line. Kansas City ranked 65th with an average of 6.5 men in the box, which did little help Edwards-Helaire despite ranking 17th in evaded tackles. This year will be a different story with Orlando Brown, Joe Thuney, Kyle Long and Creed Humphrey creating space.

Edwards-Helaire's pass-game role is quietly strong entering 2021. Last season, he ranked 11th in routes run among all running backs despite playing only 13 games in 2020. While we consider sleeper receivers to draft from Kansas City in Mecole Hardman, Byron Pringle or even Cornell Powell, the real answer could be Edwards-Helaire out of the backfield. — Derek Brown

Is this the year? Similar to Lions fans who ask the question endlessly about Super Bowl chances, Chiefs faithful propose a similar sentiment, though regarding the team’s WR2 position. Hardman, as Nate Taylor from The Athletic noted back in March, remain “bullish” on the speedster elevating his game. It’s one reason why the club let Sammy Watkins walk and didn’t invest in any positional upgrades via free agency or the Draft. It’s now or never for Hardman, a man blessed with supersonic explosiveness, but who’s been plagued by inconsistency.

Hill and Kelce are certifiable target hogs, but if Watkins’ 5.5 looks per game mostly shift to Mecole, he could morph into a viable weekly WR3 in 12-team and deeper formats. Keep in mind he finished WR34 a season ago in fantasy points per target. Available during the T.Y. Hilton and Henry Ruggs portion of drafts (WR53, 131.1 ADP), he’s oozing with upside. — Brad Evans

The Chiefs have a restocked offensive line, an underrated defense, and Patrick Mahomes in his prime. At 5 -1 odds, yes, let’s not overthink this. — Derek Brown

Kansas City to have the best regular season record in the NFL (+400, William Hill)